Like any other day, I opened my eyes and re-oriented myself to the world around me. I felt my breath come and go in regular intervals, and my body was still heavy with sleep. My brain quickly processed the tiny room, the duffle bag of clothes, and the anticipatory twinge in my gut, and I realized that I was in a cabin in Valley Ford, California, ready for the first day of my advanced Equine Guided Education training… and to meet the horse I had been asked to assess for a new equine guided program in Washington state, where I lived.

I had seen the horse from a distance four months prior, on my last trip down to the ranch to film a few days of the July equine guided training course. I remembered being curious about her, but feeling like she was off-limits somehow, as she wasn’t a part of the training. She had kept to herself, mostly, at the outskirts of the herd. No one had said much about her, just that she had been dropped off at the ranch by a family member. That happened sometimes, as I understood it, that friends or family who couldn’t or didn’t want to keep a horse any longer would bring the animal to these 200 acres of rolling pastureland and assume one more horse wouldn’t matter much to the owner, and that the horse would have a happy life roaming about with a herd and no pressure to perform in any way for people. But this horse was not taking to this sort of life. She had been dropping weight and cribbing more. She was not bonding with any of the other horses, and the ranch owner had no extra time to spend with her. It had become clear that the horse needed a new home, and an interested party had asked me to take a look at her while I was there training.

I was told that she would be in a stall so that she could have extra hay and alfalfa to try to put some weight on her. I took a deep breath, trying to draw in courage and wisdom, as this was the first time I’d done any horse assessing and, honestly, I had some performance anxiety. She was standing in the corner of the stall, her chestnut-and-white painted head held low. As I approached, I saw her ears twitch backward. I paused, wondering if the timing was wrong; perhaps she wanted to be left alone to sleep. As I stood there, waiting for a sign, she raised her head up and her ears twitched forward. As I slowly slid the stall door open, her ears laid backward again, and I could see the wariness in her eye. I paused in the stall doorway. As I stood there, I began to wonder about who she was. I wanted to know her story, and what was underneath her mix of uneasiness and curiosity. In the next moment, she took a step in my direction. Something shifted in her eye and she extended her nose towards me and the door. She was asking me to take her out.

Despite my warning that this horse needed a lot of work and care to be ready for a program of any kind, the program director had her shipped to Washington based on my feeling that she had potential. Three days after the horse arrived, despite my life being in the midst of change and upheaval, I adopted her when the director was injured in an accident and could not move forward with her program.

What followed was a love story that spanned eight years, a life together on both coasts, and a transformation for both of us that led to a deeper understanding of connection, trust, and the underestimated value of forgiveness and trying again. As I came to understand Taj’s story of love and loss, of habits and defenses built up over time to protect herself from further pain of being misunderstood or abandoned, I began to understand my own story better. I was leaving my marriage, my job, my home and starting my life over again in every way. I recognized that I was keeping people, particularly men, at a safe distance with my own version of ear pinning and threats of kicking them because I didn’t know how to trust.

I set about learning to open up, to listen better, to be patient, to keep trying. When Taj finally welcomed me into her stall without even a hint of an ear pin, I celebrated the breakthrough in our relationship like we had just won a trophy in a world class competition. Breakthroughs didn’t come without setbacks; she put me through the wringer as I tried to understand and get closer to her, biting me and kicking me when I was too focused on myself to be listening to her needs or concerns. I’m sure people wondered why I would want to keep a horse who crushed one of my fingers with her teeth, cribbed with a vengeance and went sour at the sight of a saddle. Where Taj excelled was in showing up for people when they needed it most, myself included.

When she began working in Equine Guided Coaching, her demeanor really shifted. Realizing that people were seeking out her opinions and her help, she wanted to open up, engage and shine. Taj had uncanny timing with her interventions, sometimes lying down at a person’s feet when they were struggling to get in touch with a deep feeling or sense of clarity. She would put on her scariest mean face at false pretense and walk away from meaningless chatter. Life truly is too short for anything less than authenticity, accepting others for who they are, and acting with purpose. Once I really embraced that, she became a partner like no other, often wrapping her head around me, over my shoulder in the most loving of embraces.

She shed her tendency to lash out after that first year together, and never injured anyone else. I trusted her to let me know early on when a person was becoming too overwhelming or unsettling for her, and she trusted me to move them out of her space and help them find a different approach or way of being around her. Both horses and humans place tremendous value on finding someone who is never going to stop trying, never going to give up on them.

Like any other day, I opened my eyes and re-oriented myself to the world around me. My body was still heavy with sleep as I felt my breath draw in and catch in my chest. There was a piercing twinge in my gut as I realized I was waking up to a world without Taj in it.

The evening prior, I had come home to turn my horses out when the sun had begun to soften its fiery glare and the biting bugs and flies had begun to dissipate. I was speaking aloud to all the horses, asking how their day had been, when I opened the door to Taj’s stall and stopped in my tracks. She was covered in her bedding, the dry shavings sticking to her sweaty body like sprinkles on a doughnut. The stall looked like a tornado had touched down in it. What had happened? She had been her healthy, hungry self when I had brought her in around 11:00am that morning.

I hosed her off with cool water and grabbed the halter for her friend, Bobbi, to turn them out together in the small paddock so I could monitor her behavior. But on the way to the paddock, Taj dropped to the ground at the end of the lead line, struggling to roll off the pain she was feeling. My mind began racing and my body went into autopilot mode in order to turn the other horses out with Bobbi, keep Taj in the barnyard, give her banamine for the pain, and call the vet who, to our good fortune, lived only two miles away and answered his phone.

No matter what I did to keep Taj moving or get her comfortable, she kept dropping to the ground. She even landed herself on the pavement of the driveway, scraping her face and forelegs into a bloody mess. Dr. Harrison administered more pain and muscle relaxant medication upon his arrival. He tried to do a rectal exam, but her system was so tightly clamped down that he could not feel very far inside. He recommended I take her to New Bolton large animal hospital for surgery, as the most likely scenario was that she had twisted part of her intestine and that would be her best fighting chance.

To put a twenty-five-year-old horse through an hour and a half trailer ride to a strange place and then through a difficult surgery that might have had a fifty percent chance of saving her seemed cruel. Instead, he left me with an extra muscle relaxant injection and told me to call him in a couple of hours. There was a small chance that if the medications could ease her pain and relax her body, she could roll herself in a way that would reposition the intestine back to where it should be.

All I could do was wait and be with her through the struggle. I rubbed the base of her ears, which can sometimes help relax a horse with gut pain. I slathered lavender and peppermint oils on her belly and her coronet bands, and held the bottles near her nose so she could breathe in the healing scents she had always enjoyed. There were minutes here and there while she rested on the ground, and I could hug her and she would look at me with gratitude in her eye, as if to say, “thank you for being here. Thank you for loving me.”

After a couple of hours with no significant change in her level of discomfort, I could not bear to see her writhing around on the ground any longer. I knew the next call I was making to Dr. Harrison meant I was ending her life. But she made one of the most difficult decisions relatively easy for me. If there is one thing we can definitively offer our animals, it is the relief from suffering a slow and painful death.

I held her head steady and kissed her between the eyes as the barbituates flooded her body. Her knees buckled and she went down quickly and easily, and with the second injection of euthasol, she was gone in moments.

I still find myself scanning the field for her, waiting for her low, throaty nicker to greet me as I approach. When I pause, I can still see her and hear her, and feel the intensity of her embrace. With her presence in my body’s memory, I step forward into the day, renewing my commitment to purpose, to love, to never give up. 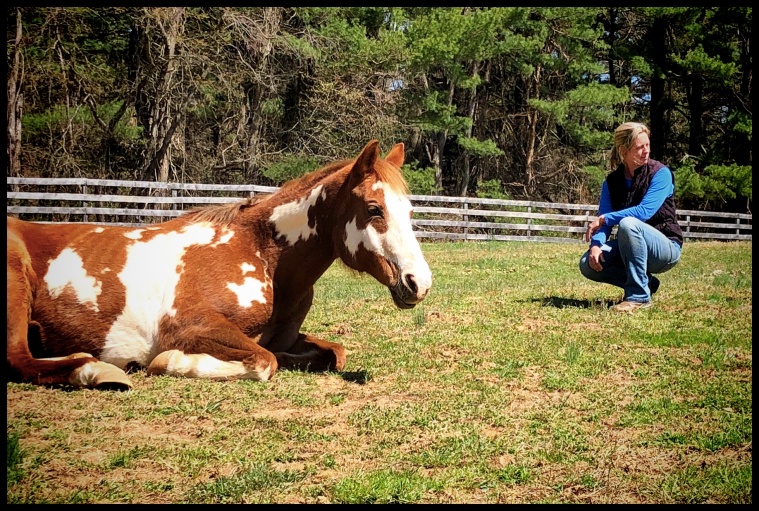