There she was, her chestnut-and-white patched coat glistening in the sun. She was shorter and wider than most of the horses in her eventing class, but she was fit and fancy and held herself like she owned the place. She was 14.3 hands and could jump 3’6” like it was nothing. Onlookers stopped their conversations to watch this little paint mare float over the rails and tear around the course making the tightest of turns and sprinting the straightaways. She was a sensational performer by anyone’s definition.

When Daphne brought the mare into the old carriage barn for the first time, she was taken aback by the sudden shift in Taj’s demeanor. Gone was the regal, bright-eyed pride she saw in the field and on the jump course. In its place was a mood of sour resentment, ears flattened back, upper lip curled, and the whites of her eyes flashing as the horse glared at her.

Taj had been living in the front pasture of this picturesque old farm for two years, since her first young owner had lost interest in horses and moved on to cheerleading. Her stunning looks punctuated the elegant, tree-lined estate as visitors were greeted by the breathtaking, pastoral scene. Daphne had no reason to think Taj was unhappy in any way, but clearly there was something wrong as they entered the stall and this suddenly angry, defensive horse began immediately cribbing on the edge of the stall door to try to alleviate her stress.

Fortunately for Taj, Daphne was curious and willing to listen to her and to trace back through her first eight years of life to understand the pain and the anxiety.

Taj wasn’t born worried or defensive. Her breeder recalled that she was one of sweetest foals she’d ever had the pleasure of bringing up, and that when she started her under saddle, Taj never even bucked. She took to riding eagerly, was willing and attentive to her rider. But life’s experiences started to shape her in a different way.

She was first sold to a young girl and kept in a show barn where the atmosphere was thick with the high pressure focus on performance and results. The barn owner was strict and demanding, and many girls ended up in tears in the barn aisle when they failed to meet expectations in some way. Taj’s trainer worked hard to maximize her potential as a jumper, determined to make her a star. Her life was a strict routine of training and showing, and she spent all the hours in between inside a stall in that show barn. In the neighboring stall was a large, dark bay mare who had grown so bitter that she would lunge out to try and bite passers-by. Taj’s sweet, curious nature was drowning in the shadow side of the show barn.

Taj was prized for her abilities, but lacked any true connection in her life. Without time and space to bond with other horses, and without a real opportunity to bond with any humans, she was essentially suffering from profound loneliness. In addition, no one was listening when she tried to pull away from the barn door and ask for time outside. No one was listening when she pinned her ears and stomped her feet to explain that the saddle wasn’t wide enough for her broad back, and pinched her terribly as she struggled to keep performing despite the pain.

What Daphne saw in her was a reflection of what she saw in herself: through the darkness of suffering, the flicker of curiosity about whether life could be different. 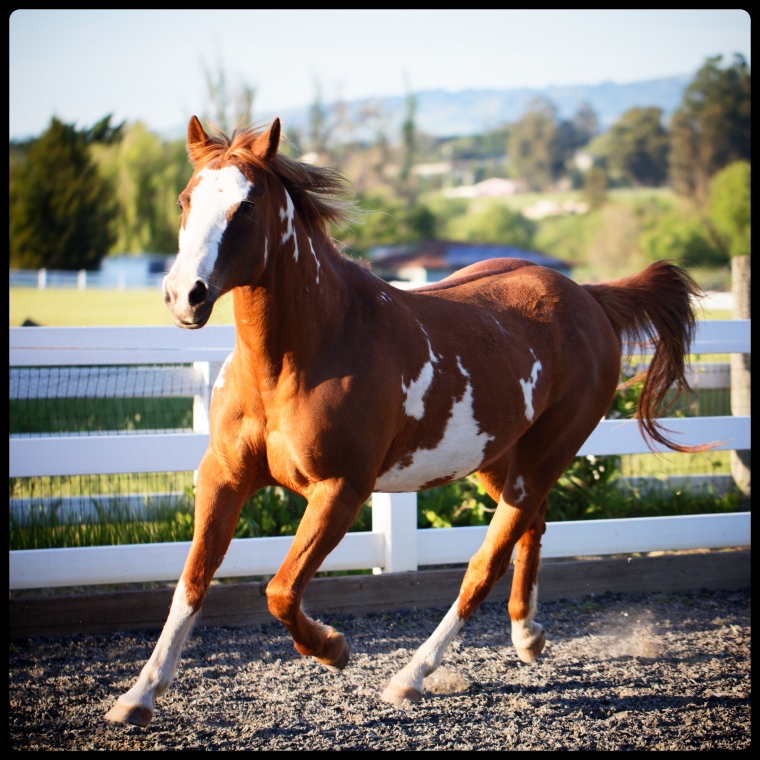 There I was in my corner office, perched in my Aeron chair, complete with lumbar support. Over the past four years, I had clamored my way up the corporate ladder from Office Manager all the way to HR Director, which gave me a seat at the table of the company leaders. I was married, had three dogs and lived in a newly renovated, two-thousand-square-foot house with a big yard in a nice suburb of Seattle. I had painted myself into the picture of success that was perfectly inside the lines of the paint-by-numbers life canvas handed down to me. I had been trying for a while to make myself believe that I was a success, that my life was a success, that I should and could be happy.

The truth was, I was miserable. I dreaded getting out of bed every morning. It hurt my back to sit in my Aeron chair all day in my office, despite the added lumbar support. I was about thirty pounds overweight. I could barely focus during meetings, and I could focus even less when trying to draft company policies and procedures.  I loved my husband and we had made it through some sickness and some health, but the two of us were plodding along on some path towards an American dream with no soul.

It had no soul, I later learned, because I was completely out of touch with my soul. Surrounded by people both at work and socially, I was isolated in my misery. I had learned to cope with stress and distress at an early age by making everything look fine, by being bubbly, upbeat and optimistic. I could play that role very well, hosting dinner parties at home and office parties at work. Underneath the friendly, buoyant veneer, I was drowning the emptiness of living without any connection to my soul’s longing.

It took several radical life changes to get me reacquainted with my soul. I quit my corporate job, twice. I starting from the ground up re-learning about horses after two decades of being away from them. I stopped eating anything with four legs because I didn’t feel right eating something I could never bring myself to kill. I got divorced. I sold everything I could. I packed up what I could fit in my truck and moved to California with my horses. I held onto a soul-felt belief that there was more to life than the paint-by-numbers version I had been living. 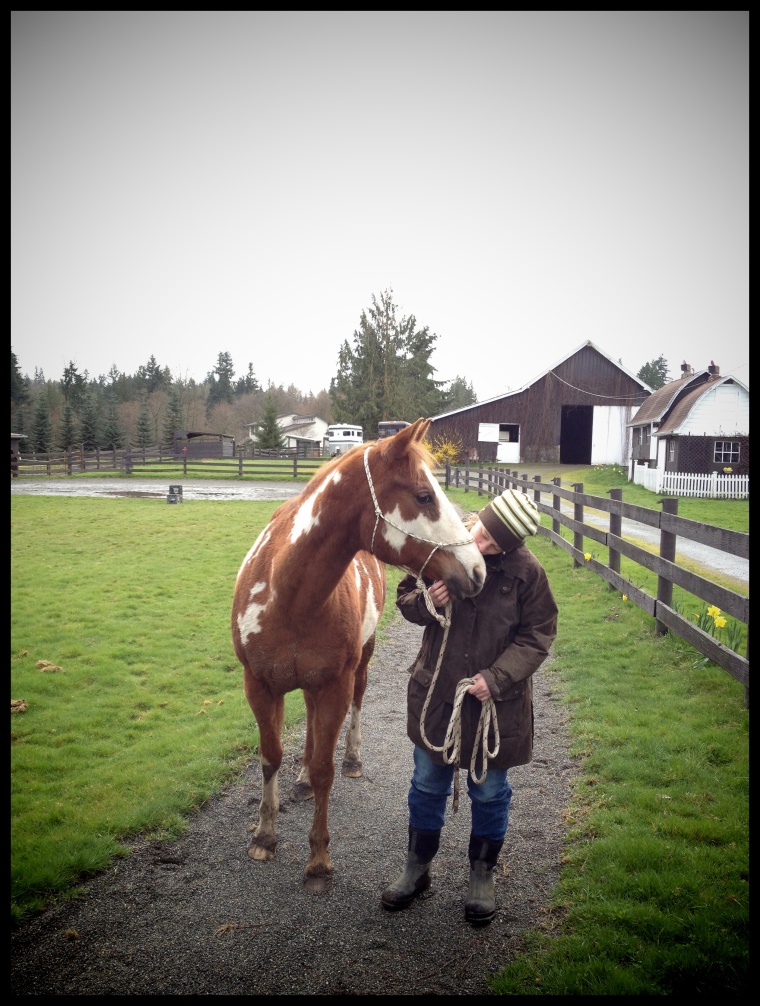 Taj’s story and mine began to weave together more than seven years ago. Since then, we have moved to seven different “homes,” from Washington to California and across the country to Maryland.

Taj has learned that she can trust me, that she no longer needs to “shut down” to escape the tension, the dissatisfaction, the potential pain of fully living. From following me into a trailer to cantering through an open field, we have worked through layers of her deeply ingrained behavioral patterns that made some very basic activities extremely challenging. Her new career in equine guided work feeds her desire to connect and to contribute her opinion without any fear of being “wrong” or being stifled. She continues to open up more and more; not without moments of frustration, hesitation and withdrawal, as nothing about changing one’s life is linear progress.

As for me, I have learned that I am able to trust my own soul. My life, my role in work and in family looks much different than the picture I used to imagine, and it may look different to what others still expect. The fear of being “wrong” or being stifled still creeps in and makes me want to shut down. It is an ongoing challenge to rise to the calling of things that seem so far from the traditional, the conventional, the easily defined. When I falter, it is because I am acting out of alignment with my soul. I am most able to feel my own truth, and my soul’s calling when I ask a horse to help me access it. This truth is the underpinning of equine guided coaching and the underlying gift the horses have to offer. 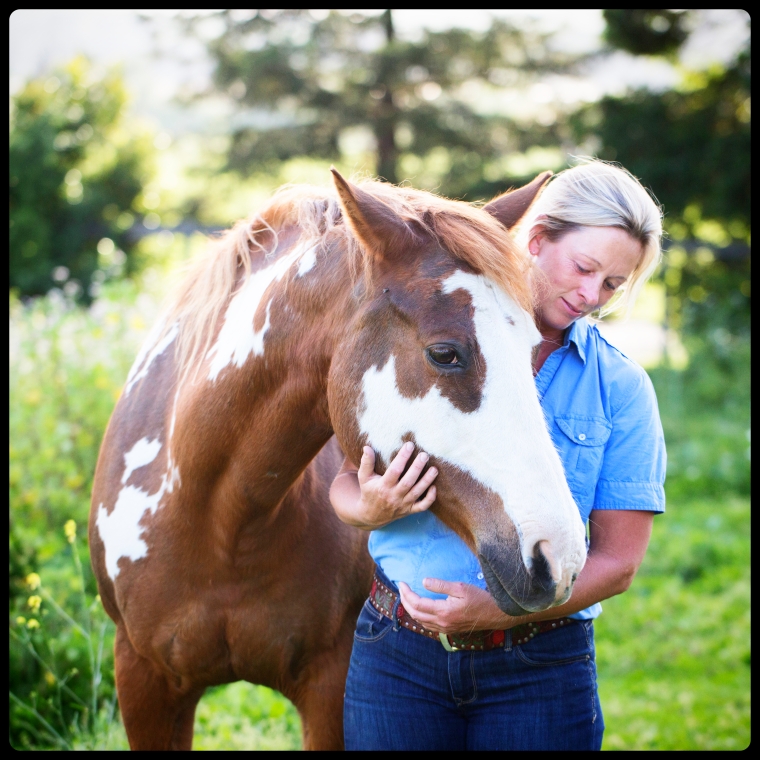 It is in the spirit of this journey through disconnection, isolation and despair to find our own truth and meaning that my good friend and colleague, Hallie Bigliardi, and I have developed a “Soul Health Intensive” program, which we are launching this May. Borrowing from the 16th century poet and mystic, St. John of the Cross, we can transform our perspective of “the dark of night” into “the luck of night.”

These “dark nights of the soul” that we experience are uncomfortable; they are the vice grips of struggling with work, finances, relationships and health. We feel disconnected and alone in our suffering through a crisis of spirit and meaning, or in our hesitance at the pursuit of sacred goals, and it is exactly then that we need to reach out, reach for the learning and the change.

Find out more about our program here: SOUL HEALTH – Spring 2018