“Just hit her with it!” the woman insisted. The girl clutched the riding crop in her right hand, her fingers unwilling to unfurl from the rein gathered around it. “I don’t want to hit her!” was all the girl could think and feel. She was frozen, holding her breath, afraid to disobey, but unable to obey.

“You’ll never get that horse to do what you want if you don’t take charge!”

The girl’s eyes burned trying to hold back the tears. She bit down on her lower lip. She wanted so badly to be a good rider and a strong person. She forced her hand to release the rein and raise the crop in the air. She closed her eyes and thumped the horse with it somewhere behind her. Still the horse was walking, not trotting.

“She couldn’t even feel that!” Yelled the woman. “Whack her like you mean it!”

The shame of not being able to make the horse trot began to overtake the girl’s aversion to hurting her. This time she channeled all her shame and frustration into her right arm, and she hit the horse with a resounding smack that shocked them both, the horse lurching forward into a trot.

“Don’t worry,” the woman had told her, “the horse has such thick skin you can’t hurt her.”

The girl grew up feeling uncomfortable using force to be dominant, but it was the only way she’d been shown to be strong, to be successful, to get what she wanted. Yet there was a horror she felt at herself, just as she felt hitting her own beloved horse, which crept into her mind and clouded her heart every time she tried to stand up for herself, be strong, be dominant. She would make requests in a “nice” way, but people walked all over her. She hated when others told her, “Oh, you’re too nice!” but she couldn’t figure out any middle ground… how to be clear and direct, eliciting action or support without either demanding or pandering.

As she reached adulthood, she started to think that the only way to get what she wanted was to become someone she hated. To do things incongruent with what she felt was right. Most people in positions of authority around her were forceful and demanding, and the only way she knew how to cope with them was to acquiesce, to please, or to appease. She could never be as forcefully dominant as they were, she could never “win” nor get what she wanted or needed. She wished she could grow a skin thick enough to render her insensitive. Instead, she learned to dissociate. In order to cope with untenable situations, she would separate from her physical body. It was as if she was somewhere floating above that body, and the mind operating the body now belonged to someone else.

The horse learned to shut down early on. She knew the thickest skin was the one that was grown around her whole being, not just her body. She would go as far as pinning her ears and swishing her tail in protest when the girl would put the ill-fitting saddle on, but the woman in charge was always nearby. She had a bite that was as bad as her bark. The easiest way to avoid the most suffering was to try to do what she was told, and often the instructions were confusing and she wasn’t sure what she was supposed to do.

She knew the girl was afraid, too. She wasn’t sure why. When they were alone together in the barn, the girl would start to breathe more deeply. She would take the tack off and brush her and cry and cry, all the way back to the stall. It was in these moments together that the horse would relax and let go of the pain and the fear, too.

When the girl wasn’t there to cry and help let go of the discomfort, during the long hours in the stall, the horse learned to crib. Alone, in a box without the ability to move, she figured out that if she bit down on the edge of the stall door and gulped down air, she felt instantly better. Any pain in her gut and any feelings of anxiety – even from the horses around her – would dissipate. She could channel her focus elsewhere and feel just a little bit better.

Taj is entering her 25th year on this earth, and she is a horse who has known suffering on many levels, though she was never, to my knowledge, intentionally abused. Her pain developed largely unnoticed, while people were doing the best they could with what they knew. Sometimes they didn’t realize that an ill-fitting saddle was causing pain. Confinement in a stall for long hours in a stressful barn was the only readily available option, and it was standard for show horses, so why would anyone think it was causing her pain? Sometimes training methods that work for some horses simply have a negative impact on others. The result is a horse who finds her own ways to cope and to survive.

This mare has been owned and loved by girls throughout her life. A young girl can love passionately and dearly, and at the same time, a young girl is not in control of very much in her life nor her horse’s life. In Taj’s case, that love was commingled with pain: the pain of trying to live up to someone else’s expectations and feeling like a failure, the pain of not fitting in or being comfortable elsewhere in life and seeking refuge in a horse, and, what happened repeatedly to Taj, the pain of having to give up a beloved horse when parents or life changes dictated it.

To this day, Taj is guarded, wary and defensive when people enter her stall, approach her too quickly, or put a saddle on her back. She is notorious for her “mean face” with ears pinned back, glowering eyes and teeth gnashing. But she never lost her ability to connect. When there is an effort to listen and to build trust, Taj responds. She can and does offer the most genuine and emotional horse hugs and kisses of any horse I’ve ever known… to those who earn her trust. 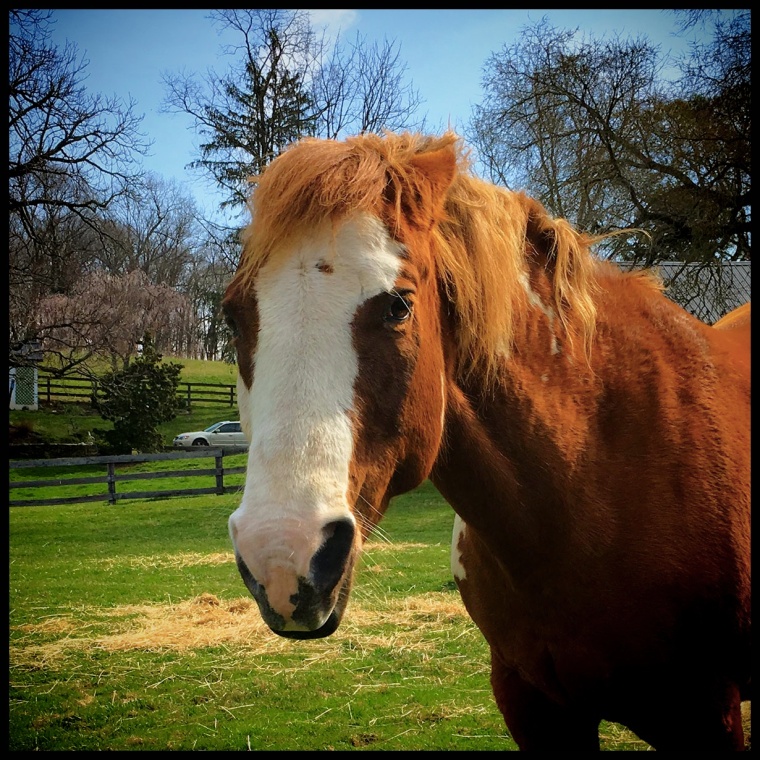 And what of the girl? What happens for all the girls who experience childhood and young adulthood riddled with training that asks them to be someone other than who they are? To act in ways counter to their own hearts in order to “be strong.” Particularly in the realms of leadership, assertiveness and integrity, girls become women who often struggle with the way they have been taught to succeed and to value themselves.

I meet many of those former girls through my work, but I also meet them at the store, on the street, at a party, in a café… wherever I go. Women everywhere were raised by parents and teachers and extended family and coaches who were just doing the best they could with what they knew. And now we are all learning more. We are learning more options, more ideas, more than we knew before. It’s giving us a new kind of strength, and new ways to be in our own skin – as thick or as thin as that skin may be. 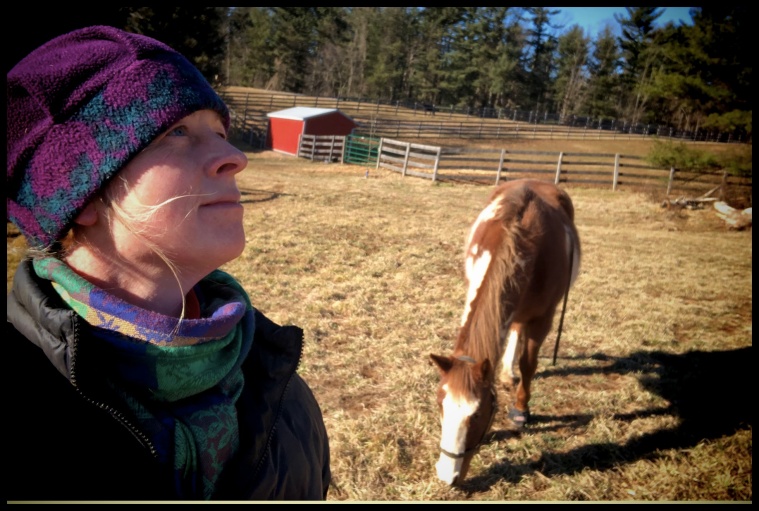 I sat in a field with Taj this weekend. Temperatures were in the low thirties, but the sun was out, taking the edge off the cold. I watched the environment while she grazed; a practice from Freedom Based Training, and a practice she quite enjoys. I believe she enjoys it because she is a horse who feels she has to be in charge all the time. She feels she has to monitor everything, make all the decisions… basically do everything herself, including opening gates and telling the other horses where to stand before exiting the field. When I watch the environment and make a point of moving and responding to any changes, she feels like she can take a break. If the cat gets too close to her, I move him away. If something makes a rustling noise in the thicket, I pay attention. If one of the other horses calls out to us, I reply. I create a safe space for her and she can relax.

What Taj has done throughout her life for the girls who loved her, and now for those who are seeking insight through our work, is provide a safe space for them to relax and be who they really are. I’ve always felt that doing equine guided work gave her back something she’d lost. At first, I thought it was the ability to express herself, and though that is a part of it, it’s not the whole picture. I see her thrive when people relax around her, when they let go, and release the pent up tension within. Taj has a way of magnifying the process of letting go and the feeling of relaxing. 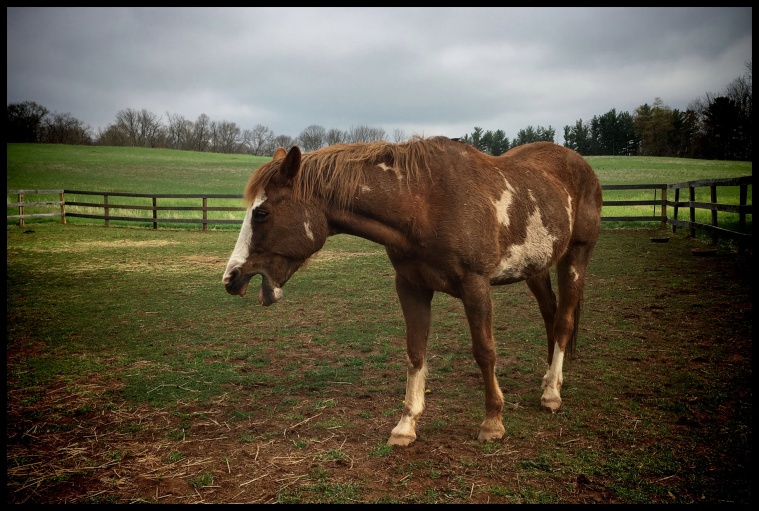 She is a powerful presence, a strong mare. There is no mistaking what she means when she is asking you to stay with her or to back off. She bears the behavioral marks of one who was both loved and wounded. She learned what she was supposed to do by others’ standards, and yet she maintained her sense of self. Despite the hardships, the heartaches, the confusion and the coping, she still seeks out love. It’s not her thick skin, but rather her big heart that makes her a survivor and an inspiration. 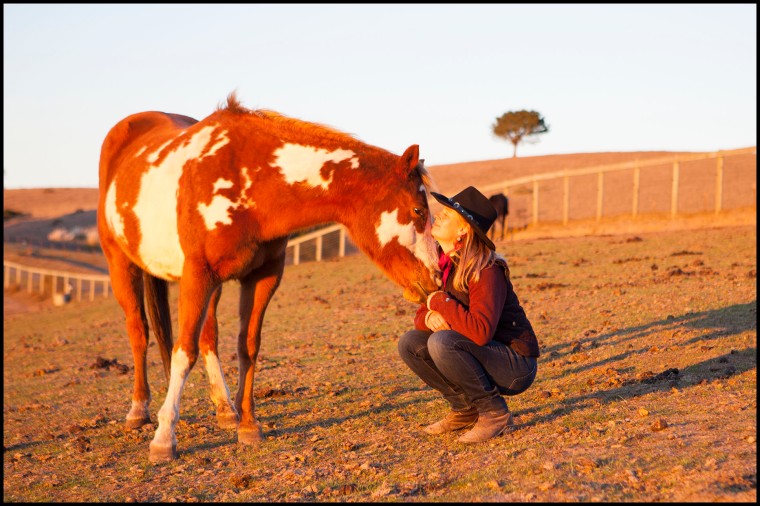