Ten days ago, I began a dedicated conversation with Taj about whether or not she could enjoy riding again. The sight of a saddle, the act of stepping up on a mounting block next to her – these things trigger a response in her that, at its most extreme appears to be fear and loathing, and at best, is an expression of discomfort. 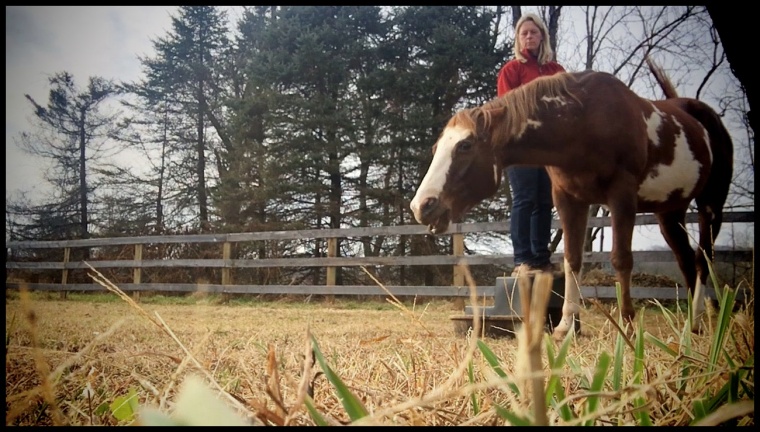 For six years, I have tried various approaches to saddling and mounting, as well as varied and “fun” trail and other riding experiences in an effort to give her a new and acceptable, if not enjoyable, experience around riding. There are better days and worse days, and to date, I have not been able to consistently change her negative opinion about the prospect of a rider getting on. Once a rider is on, she does not communicate that she is in pain or distress; she seems to be perfectly fine, as long as I do not ask her to do flat work in an arena. She also balks at the transition from a trot to a canter, likely due to a lack of strength and balance in her hind end.

Part of my process is to learn how to change her focus away from herself in a way that promotes curiosity, so that she enjoys the transition to looking at something in the environment or to engaging with me. It reminds me of trying to “get myself out of a funk.” It is when I am self-focused and dwelling on anticipated pain or hardship that I am the least accessible, the least open to a new idea and the most miserable.

The better she is feeling overall, but especially physically, on any given day, the easier this effort is to change her focus to something new. For the past week, she has been stricken with a bout of intestinal distress, causing intermittent liquid discharge from her bowels. After an initial three days of willingness to engage, ease in mounting, and much reduced ear pinning, the last seven days have been riddled with displays of aggravation and aversion to me just carrying the mounting block over to her. I have chosen not to get on, sensing her physical discomfort.

I decided to add the practice of free lunging, as I’d seen her trotting and cantering in the field when I threw hay to the horses, so I figured her tummy trouble couldn’t be too bad. Taj has historically been averse to lunging on a line, and more open, at least on occasion, to free lunging with a flag. In order to build strength and endurance, I have found some success in free lunging with Taj in an arena. Some days, and I imagine these are days when she is feeling ill or sore, she is very difficult to start. Such was the case yesterday.

I was initially surprised at Taj’s refusal to stop grazing and move. Just the previous day, I had asked her to trot around the area and introduced a ground pole. She actually moved into a more extended trot and seemed interested in going over the ground pole. Knowing that she had once loved jumping, I wanted to give her the opportunity to try it out. My plan was to continue to build her fitness through free lunging, hiking together, and trail riding, if she proved willing, and I wanted to start with a tiny six-inch jump to see whether she was interested and inclined.  She seemed absolutely inclined, and moved over it twice with ease. I did not want to do too much too soon, so although she seemed eager to go around again, I brought the exercise to a close. 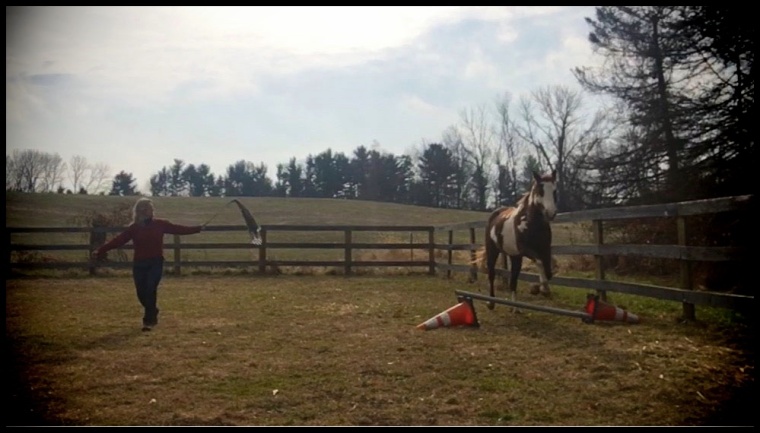 Yesterday, when I asked her to stop grazing and move around me in the arena, it took several minutes to get her to even walk forward. She refused repeatedly, would take a few steps forward when I insisted, and then stop and graze again. I forced the issue, by waving the flag vigorously in front of her nose to block the grazing, and then toward her hind end to propel her forward. When she broke into a trot, it was stiff, awkward, and short-stepped. She looked like she was sore and uncomfortable and as she rounded the turn toward the 6-inch jump, I lowered the flag and thought, “oh no, don’t jump that,” to which she responded by slowing to a walk, stepping over the rail, and then picking up her trot again afterwards.

This horse seemed to know what was okay for her to do. I wanted her to keep moving, to see if once she was warmed up, her trot would become easier and smoother. She went around again with very little insistence from me, and once again, walked over the rail, and began trotting again afterwards. The trot did improve as she loosened up, but not to the point where either of us felt it was safe to jump. She had used some muscles the previous day that she hadn’t used in quite a long time, and needed some time to let them adjust. It’s not much different at all from how sore a person feels after riding, even for a short time, after months or years of not riding.

Free lunging with Taj is a lot like riding with her, in that she may be really resistant to getting started, but once she gets going, she seems to be willing and at ease, except if something in particular is bothering her, physically or emotionally. If she feels her hind end is weak or sore, she will often refuse to transition to a canter. If she feels insecure about leaving the other horses’ sight, she will balk and often stop.

I believe that the more I listen to her and acknowledge that she has feelings about what we are doing, the more she will trust me and be willing to shift focus and, eventually, her assumed feelings and habitual reactions. The difficulty arises when I have to push her beyond her comfort zone in order to progress. Push too little, and nothing changes. Push too much, and she can react with hostility, making me feel like I might be eroding trust rather than building it. There also feels like a fine line between her taking a stand against something because she doesn’t want to be bothered or interrupted or because she is truly concerned or afraid of some form of pain. It is in this space that the conversation becomes more layered and requires more listening skill and more intuition.

Yesterday, when I stepped on the mounting block placed next to her bowl of mash, she pinned her ears and clarified she did not want to be bothered. Today, she was completely at ease with me stepping up on the mounting block placed next to her mash. She was so comfortable, in fact, that I went ahead and got on. Finding that she was still perfectly comfortable and slurping away at the mash, I lay down and breathed deeply for a few moments. Perhaps the intestinal distress is diminishing. Perhaps my timing and her mood were both better today. What I knew in those moments was, there was more in the column of indicators to keep going for it than in the column of signs to stop trying.